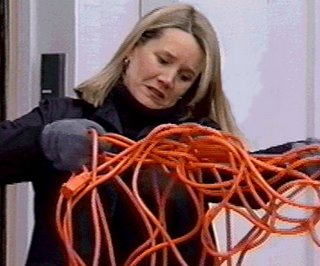 There's not a lot of things that I actually hate, but among those are hoses (garden-type water and compressed air) and extension cords.

They are always getting tangled, knotted, and kinked [there's nothing worse than those kinky hose]. Not to mention pinched, stepped on, tripped over, and generally being a pain in the arse to store.

Now, there is obviously no practical way to transfer water or air without some sort of hose or pipe, but it has always seemed to me that you should be able to transfer electricity without a cord. While it is true that electricity can and does get transfered from one wire to another through electrical induction, that is only over very short distances, such as in an electric motor, amplifier, or other power transformer.

But if current research being done at MIT pans out, all (well, some) of my woes may be relieved! As reported in MIT's TechTalk publication below (download the pdf) and elsewhere (title link), it may soon be possible to power consumer (and industrial) electronics wirelessly:

Marin Soljacic, [an assistant professor in MIT's Department of Physics and Research Laboratory of Electronics], realized that the close-range induction taking place inside a transformer—or something similar to it—could potentially transfer energy over longer distances, say, from one end of a room to the other. Instead of irradiating the environment with electromagnetic waves, a power transmitter would fill the space around it with a “nonradiative” electromagnetic field. Energy would only be picked up by gadgets specially designed to “resonate” with the field. Most of the energy not picked up by a receiver would be reabsorbed by the emitter.

That would enable laptops, mobile phones, digital cameras, and even factory robots to operate with no wired connections - just WiFi for data and MIT's new wireless power.

Now, this probably won't work for the toaster or skill saw, but dang would it be nice not to have to constantly plug- and un-plug all of my gadgety crap.

That would be awsome. I think they should figure out a way to do it for christmas trees too. Imagine a lit tree in the middle of the room with no cord! (one that's not on fire of course)

Of course, one that was on fire would soon have hoses going over to it, and I don't like hoses either.

What is the world coming to?

I don't normally think about cords that much...so they never really bothered me until you mentioned it....they are just tacky and dangerous.

Did I tell you I tripped on a cord today and nearly fell? Damn cords! Nobody saw me though...thank god.