This morning, Republican Presidential candidate John McCain gave himself a 72nd birthday present and selected first-term Alaska Governor Sarah Palin (say "PAY-lin") as his vice-presidential running mate. I think that was a good choice because she is a reformer, pro-small government, a solid conservative, and a former beauty queen(!) who has been a force to be reckoned with in Alaskan politics since she was elected Governer in 2006. She does lack international experience, but I think she will be a great contrast to career politician Joe Biden, Barack Obama's pick for VP.

This is going to be an interesting couple of months. Just 66 days 'til election day.
Posted by Unknown at 10:24 AM under: commentary, politics

Isn't GM was loosing market share? Not in Russia!

Evidently Reuters' Russian correspondent is not terribly familiar with American auto makers, that, or there has been some major restructuring going on that I somehow missed.

In the article "Russians laud size, not fuel economy at car show," published this morning at Forbes.com, Simon Shuster (apparently not the publishing house owned by Viacom- which is spelled differently anyway) seemed to claim that General Motors ("Chevy" to you normal folk) makes both the Jeep Grand Cherokee and the Ford Focus.

...visitors on press day flocked to be photographed in front of GM's Jeep Grand Cherokee...

General Motors, whose fuel-efficient Ford Focus is the best selling foreign car in Russia...
[emphasis mine]

Now, they may do things a little differently over in Mother Russia, and I know they have a bad reputation for copyright, trademark, and patent violations, but I am nearly positive that Chrysler makes the Jeep Grand Cherokee and that Ford makes the Focus. I keep track of this sort of thing.

Silly Ruskies, cars are for capitalists! As is copy editing, apparently.
Posted by Unknown at 4:18 PM under: cars, commentary, humor, international 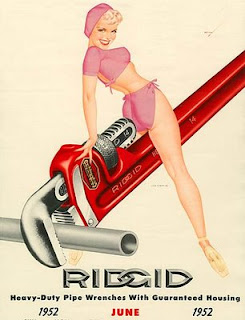 Posted by Unknown at 4:23 PM under: humor, interesting, international

Ernest Borgnine sure does look young for being 91 years old. What's his secret?

Now, that's what I call a fountain of youth! (Eeeeew! I can't even believe that I just typed that! I need to go wash my hands now!)
Posted by Unknown at 8:50 PM under: humor, inappropriate, interesting

This week on the web

"China breaks Olympic promises on rights, media, pollution" -- Are we supprised by this? (link)

Busweiser (Anheuser-Busch)'s takeover by Belgian InBev may have been motivated by European corporate taxes that are nearly half of what Anheuser-Busch payed in America. How does that happen?! (link)

"Suddenly being green is not cool any more" in Britian. (link)

Well, there ya have it. I read and posted those articles, so I think they're probably worth a little bit of your time to read. If you have some time, that is.
Posted by Unknown at 4:14 PM under: commentary, economics, food, global warming, international, news, politics, this week

I'll see you at the debates, bitches

Since John McCain mentioned Paris Hilton in his "racist" ad talking about Barak Obama's celebrity lifestyle, she is apparently running for office! That's so hot.

It's kinda funny, but her "energy policy" is actually pretty close the "All of the Above" plan that House republicans were pushing before the democrats decided that America's energy security was not as important as their August vacation plans.
Posted by Unknown at 8:53 AM under: commentary, humor, politics, video

Welcome to your relaxation time...

Man, I love the Internet. And "Zoolander."
Posted by Unknown at 3:10 PM under: internet, movies

Man, I miss playing Scrabulous on Facebook. Even though I really didn't play it much, and have not kept abreast of all the recent controversy, it was a fun diversion inside of a diversion (Facebook). For the uninitiated, Scrabulous was a direct knock-off of Hasbro's game, Scrabble, that you could play with your friends on Facebook. It was literally just like Scrabble, but on the computer, which was nice. But, surprise (not really), Hasbro filed suite against the two brothers who built Scrabulous, Rajat and Jayant Agarwalla, so they responded by removing the application from Facebook.

...And setting it up on a standalone website at www.scrabulous.com where you can play against other people online, over email, or just against the computer. So Scrabulous addicts can still get their fix, just without the Facebook integration, which is really half the fun, since you could challenge your friends and play on and off whenever you happened to be checking your account without having to go to another website.

Enter Wordscraper, the Agarwalla brothers' newest attempt at Facebook "Scrabble." But in this version, the board is different, so they probably won't get sued - at least not as quickly. Users can actually change the board around to their liking for each game, even if they want to make it exactly like that other board game.

Despite some complaints, Wordscraper is still getting a 4.6 our of 5 rating (with 105 reviews) and has over 133,000 active users, as of Tuesday morning.

Hasbro's attempt on the other hand, the New York Times is reporting that "players are not universally flocking to Hasbro’s official Scrabble game," and that despite their best efforts,

Hasbro and Mattel’s official versions of Scrabble on Facebook continued to draw nearly universal boos. The Hasbro version continued to seize up on Sunday, letters were impossible to play and common words were not accepted.

So, anyone up for a game of "Wordscraper?"
Posted by Unknown at 9:05 AM under: facebook, interesting

Can your afford it?

The saying used to go, "I can't afford to vote republican," but given Barack Obama's stated presidential goals, such as spending an additional $65 billion a year of American taxpayer money ($2,500 a year each) to "cut worldwide poverty in half," a wholly unrealistic goal in the first place, it would be much more realistic to sloganize, "I can't afford to vote Obama."

Posted by Unknown at 2:27 PM under: commentary, economics, international, politics