I must not drink enough!

Today, on the anniversary of the beginning of prohibition in 1919, I came across an interesting (if not terribly well written) article in the NYT last week about the prevalence of binge drinking. It makes me look reealllly good.

However, I have two problems with the article, which are below. See if you catch the same things I did, or if I'm totally misinterpreting something.  (My emphasis.)

Binge drinking prevalence increased with household income. About 20 percent of people who earn $75,000 or more annually reported binge drinking. However, the data showed that people with lower incomes tend to binge more frequently and consume more alcohol per sitting.


Over all, states with the highest age-adjusted prevalence of adult binge drinking were in the Midwest and New England, and included the District of Columbia, Alaska and Hawaii.


Now, in the first one, they may have meant that a higher proportion of wealthier people binge drink, but of those poor people who do binge drink, they tend to do it more frequently, but they didn't say it very clearly.

The second one has no explanation.

And while I consider the amount of drinking that I do to be on the higher side of what is reasonable for someone of my age, I'm apparently waaay behind the curve.  I don't remember the last time I had nine drinks in a sitting [wait a minute, could that be a correlation?], and I definitely don't do that five times a month!  Sheesh, bunch of drunks out there!

Reminds me of this exchange from Marketplace Radio just before New Years that finds that walking drunk is 800% more dangerous than driving drunk (per mile traveled).  Worth a listen / read.
Posted by Unknown at 2:01 PM under: beer, commentary, health

Afilumaphobia - The Fear Of Running Out Of Yarn

[Ten minutes later...]  Apparently there wasn't really a Latin word for yarn, but khorde is Greek for "gut string", which is probably what was used as one of the original yarn-like things.  Filum is thought to be the root of fiber, so maybe that would be the best fit.  Therefore, my newly christened word for the fear of running out of yarn is Afilumaphobia.  Not sure if that'll stick of not, but it's worth a shot.

The reason I bring this up is that Tuesday night I started (and subsequently finished Wednesday) a new crochet project with some really nice, expensive yarn.  It was a really neat pattern (which I kinda altered / flubbed), but the yarn I got was not the weight that I was looking for.  I was looking for a "super chunky" (4 wpi-ish) yarn that was part wool and part something exotic, but I ended up with a "bulky" weight (9 wpi-ish).  The yarn is really nice, 50% merino wool and 50% yak, and super soft, but because it was about half the weight I was looking for, so I decided to work it with two strands at once, trying to get the same chunky effect as with the original yarn, and although frustrating to get started, I think it went well.

But because of this change it took more yarn than I originally thought, so when I was a little less than half way through with the original pattern I started to notice the two balls of yarn shrinking much faster than I thought in the bag I was pulling them from and got really worried I wouldn't have enough to finish.  Each hank was only 125 yards, and i was using twice as fast as I thought!  (See Afilumaphobia, above.)

Ordinarily this wouldn't be too big of a deal -- just go to the store, try to find the same dye lot, and buy some more.  But this yarn was $20 a ball, and due to my lack of planning ahead, I had absolutely no opportunity to go get more before my deadline.  Fortunately it all worked out fine, and I just ended up making it one row shorter than I intended.

I think it will be fine, since the yak seems to have really good loft and did a lot of reading about "blocking" your projects as a final step to even out the stitches and get the fibers to relax and soften up a little.  To block a project you basically soak it in the sink, squeeze it out, and lay it out in the right shape, and let it dry.

I had never done a project that I figured could benefit from blocking, so I gave it a try this time, and wow, is really did soften up!  And even more surprisingly, it stretched out by nearly 20%!  Whoops!  I could have made it significantly shorter and added that last row to make it thicker.  Oh well, live and learn.  Now I've just got to turn the scarf into a Möbius cowl by giving it a twist and sewing it together.  I'll follow up with pictures of the finished product and maybe even a model shot!

Posted by Unknown at 7:00 PM under: crochet

So that's why they call it that. Or not.

Didn't see that one coming... 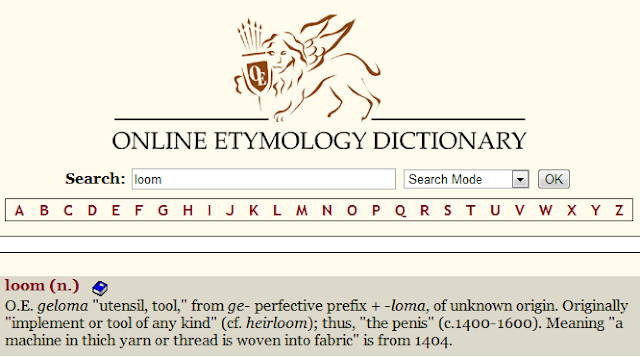 See what they did there?

Yeeeaahhh... strange.
Posted by Unknown at 5:04 PM under: random, words