What does the market think your house is worth?

As off-the-wall as I think Glenn Beck is most of the time, it'd be a lot easier to not like him if he didn't make so damn much sense.

In this video from February he explains (with the help of a gigantic graph!) the historical price of houses in the U.S., adjusted for inflation, of course, and finds that they tend to stick around $100K. You can ignore the parts with Obama, if you'd like; they really don't affect the analysis.

Now, I haven't independently confirmed his figures, but they do seem reasonable, and if the trend line he draws actually continues like that, we're totally boned. I don't personally think that prices will continue to plunge like they have been, but we were long overdue for a major correction in housing prices.
Posted by Unknown at 4:06 PM under: economics, politics, video

Because "He is Latino," eh?

So when Democrats choose (behind closed doors, of course) to exclude an otherwise qualified individual from a U.S. Supreme Court nomination because "he is Latino" it's totally acceptable, but when Republicans raise valid concerns about a Latina's potentialy dangerous opinions, statements, and actions, they're racists and sexists.

"The groups singled out three--Jeffrey Sutton (6th Circuit); Priscilla Owen (5th Circuit); and Caroline [sic] Kuhl (9th Circuit)--as a potential nominee for a contentious hearing early next year, with a [sic] eye to voting him or her down in Committee. They also identified Miguel Estrada (D.C. Circuit) as especially dangerous, because he has a minimal paper trail, he is Latino, and the White House seems to be grooming him for a Supreme Court appointment. They want to hold Estrada off as long as possible." [My emphasis.]

Wall Street Journal, Saturday, November 15, 2003.
Sounds about like typical Democrat shenanigans to me. The sad part is, the uninformed public will let them get away with it, time and time again.
Posted by Unknown at 10:05 PM under: commentary, politics, racism 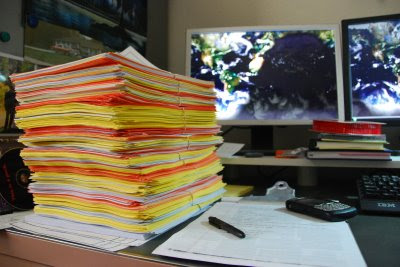 That is an awfully large pile of work for someone who doesn't have a real job!

Those are all anonymize surveys (remember my "data collection?") that I have to enter by hand into web forms. Talk about crappy and carpal-tunnel inducing. Oh well, at least I make a few bucks doing it.

Global Warming - Brought to you by The Climate-Industrial Complex

If you've talked to me or read this blog at all in the past you are probably already aware of my stance on Anthropogenic Global Warming -- I think it's basically an overblown farce designed and presented by rich scare-mongers (like Al Gore) to give people something abstract to worry about and line their pockets with cash in the process.

Now the U.S. House and Senate are debating a European style "Climate Change" bill, complete with handouts to the worst carbon-emitters, coal companies, and this weekend the Copenhagen Climate Council is hosting the World Business Summit on Climate Change hoping, as Bjorn Lomborg writes in today's Wall Street Journal "to push political leaders into more drastic promises when they negotiate the Kyoto Protocol's replacement in December."

Naturally, many CEOs are genuinely concerned about global warming. But many of the most vocal stand to profit from carbon regulations. The term used by economists for their behavior is "rent-seeking."

So really, these businesses stand to gain significantly from radical (and radically expensive) climate change legislation being pushed on countries rich and stupid enough to sign their citizens up.

And don't believe for a second that these "green jobs" being "created" by the clean energy companies are free:

Spain has been proclaimed a global example in providing financial aid to renewable energy companies to create green jobs. But research shows that each new job cost Spain 571,138 euros, with subsidies of more than one million euros required to create each new job in the uncompetitive wind industry. Moreover, the programs resulted in the destruction of nearly 110,000 jobs elsewhere in the economy, or 2.2 jobs for every job created. [My emphasis added.]

So with the global economy in the state that it is in (not so good), do we really need to be costing tax payers billions of dollars in additional taxes while at the same time ensuring that many more will join me in the ranks of the unemployed? That doesn't sound like good policy to me, it sounds like pandering to some self-serving interest groups.

President Dwight D Eisenhower famously worried about the Cold-War era Military-Industrial Complex that "there is a recurring temptation to feel that some spectacular and costly action could become the miraculous solution to all current difficulties." The same can now be said about the unholy alliance of self-interested businesses, grandstanding politicians and alarmist campaigners making up the new Climate-Industrial Complex.

*****
Also, I highly recommend Mr Lomborg's 2007 book, "Cool It: The Skeptical Environmentalist's Guide to Global Warming." Among other things, it is an eye opening look at how much good we could be doing with all the money we are throwing at global warming -- like eradicating malaria, providing everyone in the world with clean drinking water, or controlling AIDS.
Posted by Unknown at 10:10 AM under: global warming, international, politics