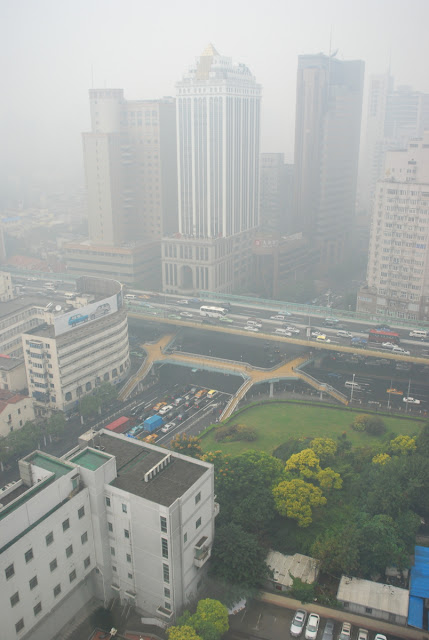 Today I woke up to lightning, thunder, and a nice rain at about 6:30am in Shanghai.  It hadn't rained here in weeks, which is nice for wandering around in this warmer than average fall, but things tend to get pretty dusty and grimy without a little rain to rinse them (and the air) clean, so the rain was very welcome.

But it didn't last.  Something like 5mm actually fell, and the rain didn't knock the pollution out of the air, it just added some humidity to an already humid week and seems to be making the smog hang significantly thicker than usual.

Above and right are a couple of shots I just took out of my office window to illustrate my point.  Eeew.  When these pictures were taken, about 11am, the pollution was in the "Very Unhealthy" category and the EPA recommends that "People with heart or lung disease, older adults, and children should avoid all physical activity outdoors. Everyone else should avoid prolonged or heavy exertion."  That's why I'm staying inside.  ;)

The amount of pollutants in the air is definitely harder to gauge by looking at than I would think though, so luckily there are monitors to take the guesswork out of it.  The really harmful stuff is super small (2.5 micrometers in diameter) and stays suspended in the atmosphere for a long time.  Particles this small can go straight into your bloodstream through your lungs, and are therefore what is monitored by the U.S. Consulate here in Shanghai.  Check out their website for a good description of what they measure and hourly updates of what the PM2.5 count is at the Consulate building in Shanghai.  You can also check out their Twitter feed.

(Why it's posted on Twitter - which you "can't" get to from within China - is a slightly complicated story, which you can read about if you just Google "u.s. consulate shanghai air quality monitor" and read the WSJ and other stories.  The "official" (and reasonable) reason is that, in China, Americans primarily use Twitter, not Weibo, the Chinese equivalent, and since Americans are who the U.S. Consulate is there to educate, Twitter is what gets used.)

It's also worth comparing the U.S. readings to China's own readings, which are sometimes wildly different.  But not as bad as Beijing's Chinese versus U.S. readings, I hear.  Try the Shanghai Daily Air Quality page and the Shanghai Environmental Monitoring Center, but you'll have to get Google to translate it for you.  The Chinese authorities also measure totally different things and report them differently, so there is oftentimes good reason for the readings to be different.

So yeah, I'm just going to hang out inside today and catch up on some of the reading that I've been ignoring lately.

Your bill is late. Again.

I wrote this a while ago and didn't think that I should post it when it was fresh, but this was a semi-common mental self-commentary that I used to have while working as a manager at the self storage place...


So lemme get this right: your company knows it has a bill that is due on the 1st of every month and is the same amount every month, but you only process checks on the first Tuesday or Thursday of every month.  Meaning that if the first of the month is on a Friday, you're not going to cut a check until the following Tuesday, the fifth of the month.  Plus, it's sent on a horse and buggy by thoroughly modern sorting and transportation methods through the U.S. Postal Service from another state, so it's going to take at least three additional days to get to me.

Yes, you're being assessed a late fee.  No, I don't care that it's going to break your system to cut an out of cycle check.

Have a good day, now!

In the process of getting settled into the girlfriend's apartment here in Shanghai it became painfully obvious that while the "premium" Huawei router included in the internet package may be good at reporting my internet activity to Chinese officials, it does a terrible job of getting WiFi through the ridiculously thick concrete interior walls.

I can take care of the former issue with a good VPN subscription that encrypts and then routes all of my internet traffic through California.  The latter issue wasn't a problem while sitting on the couch in the living room, three feet from the router, but when we decided to set up an office in one of the spare bedrooms on the other end of the apartment, the lack of a reliable internet connection became problematic.

Luckily, I brought along my old Linksys WRT54GL wireless router when I came to China, so I hoped that I could bridge the two routers onto the same network and therefore have a strong network connection in the office.  After a bit of searching, it turns out that I had my jargon wrong, and that by connecting one router to another with a cable to extend the range of the network, I was actually cascading the routers, and this is incredibly easy to set up.  Best of all, you don't have to mess with the original, primary router, which is good, because it's all in Chinese and I don't know the admin password.

All you need to do is follow the instructions on this Cisco Knowledge Base article, but here's the basic rundown with my commentary:

That's it!  It's actually easier than my lengthy commentary makes it look.  You now have two routers broadcasting the same wireless network that you can move between without issue.  Setting it up this way also allows you to keep sharing network resources (drives, printers, etc), because your still on the same segment of the network (third octet of the IP address).  At some point in time you should also have changed the default password to access your router from "admin" to something a little harder to guess.

Now, to actually bridge two wireless networks together (no cable in between the routers), you need different equipment than I have.

If you're having this problem, too, I hope this helps!  One of these days I'll follow up with pictures of the office and its awesome view.
Posted by Unknown at 12:00 AM under: geek, tech, tips 'n' tricks

Electoral College Is Good For Colorado

This is what happens when I wake up at 5am the morning after having dinner with a couple of east coast liberals and can't get back to sleep...

Electoral college is the only thing that keeps smaller states relevant to national, two-party politics. While it's far from a perfect system, no one outside of Colorado would care what the 5.1 Million Coloradans think about anything if it weren't for the fact that whoever wins at least 51% of our votes gets the power of all of nine of our Electoral College votes. 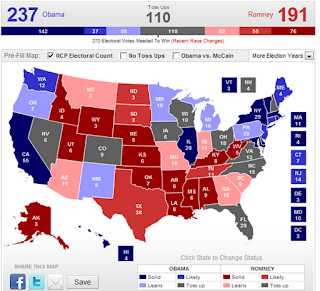 If “popular vote” advocates had their way, the only places that would matter to politicians on a national scale would be the population centers – Southern California and the East Coast 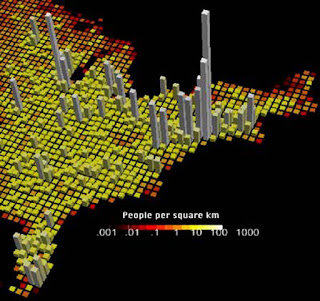 source
Sorry Rust-Belt factory workers. Sorry ranchers. Sorry hunters, fishers, hikers, motorcyclists. Sorry fly-over states. Unless you live in a large population center where politicos deem worthy of spending their time, your concerns no longer matter and will dictated by those who probably have never even seen your state.

No national politician would waste their time traveling through Colorado, Ohio, or Iowa unless they knew that they needed to get enough of their supporters to turn out to tip the whole state in their favor. Otherwise they would spend all of their time pandering to the coasts and never even think about the states that have a total population lower than the particular metropolis they're fundraising in that day.

Of course, this results in some pandering the other way, too. The Farm Bill wouldn't be nearly as much of a mess if Iowa weren't a swing state. No one would care about National Forest logging rules if Colorado weren't a swing state. This can go either way depending on how and if these thing affect? your daily life, but it does bring otherwise dull issues to the national spotlight from time to time.

I think the Framers knew what they were doing when they decided on the Electoral College system of presidential politics – giving “smaller” states a little more leverage against their “big” neighbors in a two-party system.  This does screw up any chances of a viable third party, but that's an issues for another day...

Sorry for the rant.

Good FAQ on the Electoral College here.
Posted by Unknown at 7:37 PM under: politics, rant