I've been using my first Android smartphone, the T-Mobile G2x (LG Optimus P999) - the first dual core smartphone out there - for about a year now and I'm still pretty happy with it.  Of course, I can't ever leave well enough alone, so after dealing with the random rebooting issues for the first few months and imaptiently waiting to see if LG or T-Mobile was going to do an over the air update to fix it, I went the Root and ROM route with CyanogenMod 7 last August (see this post for more info). 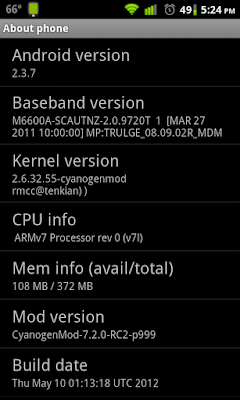 All has been well, and the usability and reliability gains over the stock ROM have been astounding.  My battery life is literally 50% better than stock, I get the notification lights that I so desperately missed, my phone only shuts off when I tell it to, and I get to have a slight smug superiority over those with stock phones.  ;)

But since Android 4.0 / Ice Cream Sandwich launched, oh, seven months ago now, I've been hoping it would trickle down to my, now old, phone in the form of CyanogenMod 9.  There seems to be a pretty good enthusiast base for my phone still, and there has been good progress mentioned in some of the forums, but no stable builds for my phone yet.

Since I needed to do something with my phone, and since CyanogenMod 7.2 RC2 had been released earlier this month, I decided to flash that to my phone and see what the differences were.  As always, I got nervous and searched for instructions (the most clear were here), but everything went extremely smoothly.  (Here's a good place to start get started modding your T-Mobile G2x.)

And the verdict is... there's no obvious difference.  But as least I can rest easy knowing that my phone is as up to date as it can be at the moment.
Posted by Unknown at 5:33 PM under: android, geek, mobile phones