I've been wearing prescription eyeglasses for about half of my life now, and while I've always taken good care of them and only broken one pair (when I was 16), I am always super paranoid about losing or damaging them because they are so dang expensive to replace!

A few months ago I gave Warby Parker's online glasses shop a try with great success.  Instead of spending $200 to $400 dollars out of my pocket to get a nice set of frames with good lenses, I spent $95 and even got to try on five pairs at home through the mail.  The glasses are high quality, the experience great, and I would recommend it to anyone needing new or additional pairs of glasses.

Great glasses for under $100 is nothing to shake a stick at, but if you want sunglasses, have a really strong prescription, or want some higher-end frames, you're going to pay a little more, possibly eating into the "deal" aspect of online optical shopping.

But if you happen to be in Asia, you can do much better than $100 by visiting an optical market, like the 3 Yeh optical market (三叶眼镜城) in Shanghai!

"Markets" seem to be a big thing in many Asian cities.  They're basically low-rise warehouses filled with small shops all selling basically the same thing and yelling at you to buy it from them.  There are all kinds - flowers, birds, fish, clothes, electronics, eyeglasses, etc.  And since most of the stuff that we pay way too much for in the U.S. is made in China, you can get some screamin' deals if you can handle the stress.  The fact that intellectual property laws aren't really observed here probably helps, too.

Getting to the 3 Yeh market is easy by metro.  Head for the Shanghai Railway Station metro stop, go out Exit 4 [update: only if you came in on Line 1 - see below], and you're right there.  (The market is on the south side of the railway station.  Don't go out the north side, you'll never find your way from there; I've tried!)  Go through the big doors, head up the escalator, and prepare to be mobbed by hundreds of Chinese ladies trying to tell you that they have the best deals.  It helps if you have a Chinese speaker in your group, but most everyone seems to be willing to work with you by typing their asking price into a calculator for you to see.  Check out CNN Travel's write up here.

The rules of bargaining apply here just as much as elsewhere.  You should easily be able to get at least 1/3 off of their asking price if your prescription isn't too bad (i.e.: if they ask 300RMB, offer 200RMB and don't budge).  But as with everything else you might barter over, don't fall in love with a specific one and have a backup.  Shouldn't be a problem with the hundred or so vendors at the 3 Yeh market.  The vendors can be quite pushy, so if you don't want them to keep shoving glasses at you, I found the silent treatment worked pretty well.

Since I already have my good pair of glasses from Warby Parker and spring is just around the corner, I thought it would be a good time to try to find some prescription sunglasses.  I have a tough face to fit glasses to, so I wasn't super optimistic, but lo and behold, I managed to find two pairs that I liked at two different stalls.  With a little bargaining, and because I have an easy prescription, I got one pair for 150RMB and the other for 170RMB.  That's about $24 and $27, respectively.

[picture of my glasses]

Not bad, although I really owe it to my girlfriend and her potent combination of language, bargaining skills, and stubbornness.  They were done in less than an hour, and there's even a decent Ramen place on the ground floor to grab lunch at while you wait for your new specs!

UPDATE! 14 March 2013 -- It appears that the most convenient exit to take out of the metro station changes depending on which line you came in on.  If you took Line 1, then Exit 4 is your friend.  If you came in on Line 3/4, take Exit 2 and then cross the bus-filled street straight in front of you.  Even though you can connect between Lines 3/4 and Line 1, the station is pretty spread out underground and there are separate exits for each line.

Also, some of the prices are so cheap that bargaining isn't even worth your time.  If the opening offer is 150rmb for a stylish, half-way decent pair of specs, just go with it.  Stall 4099 was great to deal with on my most recent trip.
Posted by mnthomp at 2:25 AM under: china, shopping

Email ThisBlogThis!Share to TwitterShare to FacebookShare to Pinterest
5 comments

Interesting, if slightly reactionary, article from Quartz (aka: The Atlantic's hipster wing) about the origins of China's (recently confirmed) cyber binge and their designs on being able to defeat their number one frenemy, the US.


I'm not sure how much to make of the original material or the author's take on this.  I feel that he may not be very familiar with the lofty rhetoric that the Chinese government and military like to toss around and could be reading a little more into the twenty year old reports than is reasonable.  Although I could be wrong, and China could be ready to flood the US with opium, crash our currency, and start setting worldwide fashion trends.  Er... maybe. 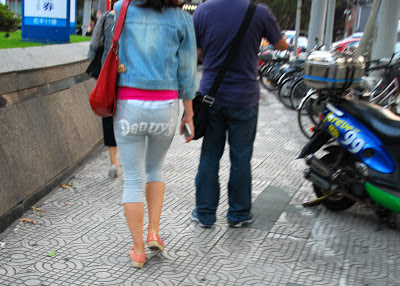 Or maybe he's under the odd delusion that China has ever or will ever follow the rules on anything.  Despite what CCTV might tell you, rule of law still doesn't seem that popular here.