Ford's new global engine for the Focus and Fiesta (as well as several other Euro Fords) looks to be one of the coolest pieces of automotive engineering from any company in a long time.

The Fuel Economy of New Hybrid Small Cars, according to the U.S. Department of Energy, is pretty good.  The best of the bunch, of course, is the 2012 Toyota Prius 1.8L at 50 miles per gallon combined city and highway.  That's good, but the other cars in that class range from just 34 (Honda CR-Z) to 44 (Honda Civic Hybrid) combined MPG.

And while these 40+ MPG small cars will help you save at the pump, the hybrid system is still heavy on the scales and on the pocket book, making these cars significantly less fun to toss around in the curvies and to write that payment check to your bank every month.  Under ideal conditions, disregarding maintenance costs, and with a pretty cheap hybrid Civic, you would still have to drive over 86,000 miles to pay for the hybrid option in gas savings.  Many people who buy new cars will never keep them that long (especially in a hybrid when you have to pay for new batteries at around 70k, yikes!), and therefore should not spend the extra cash, just to satisfy their green enviro guilt.

But I didn't start writing this post to bash on hybrids.  If that's what you gotta do to sleep at night, you go right ahead. ;)  What I wanted to write about is Ford's miniature new powerplant for their smaller cars.  It's simply a marvel of engineering and the most power-dense engine Ford has ever produced.

The mini marvel I'm talking about is the new for 2012 (2014 in the States) 1.0L 125 EcoBoost.  This little thing (the block is about the size of a sheet of notebook paper) packs over two horsepower per cubic inch (which is a whole lot, fyi) and motivates the Focus 5-door to 56.5 combined MPG. That's right, one-point-zero-liters (999cc to be exact), three cylinders, direct injection and a turbo charger can churn out 125HP and 147ft-lb of torque, while still only emitting about 185g of CO2 per mile driven.  Pretty impressive efficiency and a work of engineering.  Its exhaust manifold is even integrated into the head so the hot exhaust can be cooled by the engine coolant to prevent burning up the turbo under part throttle conditions; instead of the current method of cooling them with extra fuel - which is effective, but not very good for mileage.

Read the Ford Focus 1.0 Ecoboost Zetec review at Autocar.co.uk and Motor Trend's 1.0 EcoBoost European Spec First Drive and imagine getting 50 MPG in something that is actually fun to drive.  Then be blown away that this Ford 1.0 is ‘to get 177bhp’ in different trim.

If you read the above linked articles, I'm sure you've gleaned this, but the 1.0 EcoBoost gets the same power as the current 1.6L un-boosted gas engine, a bit less than the U.S. 2.0L (but with the same torque - the stuff you feel in your butt when you accelerate) and crazy, better-than-a-hybrid, good mileage.  I'm sure it won't be a rocket off the line, but the smaller and lighter motor between the front struts should make it nimble and easy to drive through the curves.

Anyway, this motor is Europe only for now, of course, but I can't wait to give one a test drive when they hit our shores.  I'm also curious how our 5,000 foot elevation will effect the turbo motor compared to the serious tole the thin air takes on naturally aspirated motors.
Posted by Unknown at 3:15 PM under: cars, commentary


I'm not sure if I fully understand this recent meme, but "Ryan Gosling, Lindy Hopper" is quite entertaining.  And you should probably check it out. 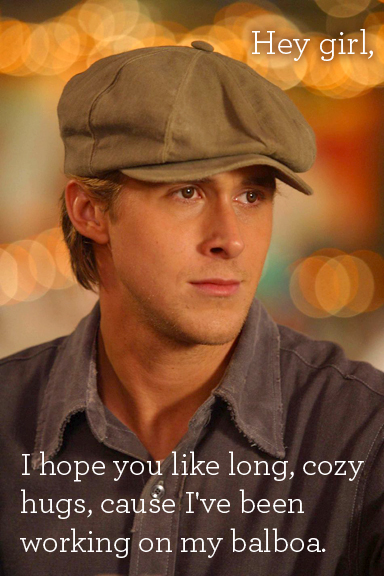 It's not included on the semi-reliable "Know Your Meme" website's Ryan Gosling page, but the evolution is obvious from what is already there.
Posted by Unknown at 10:01 AM under: swing