This running thing appears to have become a thing recently.  I know it's probably just an observation selection bias - because I've been running more, I notice running more - but it really seems that running has become more mainstream recently.
I used to never run.  Unless I was being chased by something that could harm me, of course.  But growing up, going to school, and working on the Front Range of Colorado offered very few opportunities to literally run for my life.  Thank God, because I probably wouldn't be here if that were a regular occurrence.  I remember playing soccer in elementary school and not liking it because I was such a bad runner.  And our "track" unit in middle school gym class was also a disaster, because I was so lanky and uncoordinated, that if I ever did get going fast, I would just end up kicking myself or something.  Then by high school, running during your lunch break was the punishment dealt out for missing a session of some class, which didn't exactly encourage my embrace of the sport.

Even in college, when I finally started to catch up to my own body, I still preferred to walk or ride a bicycle if I needed to get somewhere or play basketball (with its minimal running) if I wanted to be sporty.  When swing dancing became my primary extracurricular, that provided more than enough cardiovascular activity for me to feel fit and active.  I did do the typical lunch hour gym routine for a while when I had a desk job that was convenient to a fitness center, but even then I'd just hit the treadmill for ten minutes to "warm up".

It wasn't until 2012 when I started dating my girlfriend, who was/is into fitness, and moved to China, where I had lots of extra time on my hands, that I even started to go to the gym regularly and doing more than just a cursory 15 to 30 minutes on the elliptical or treadmill.  The air in Shanghai isn't as bad as many people think (most of the time, at least), and I got super bored of running in place in the carpeted gym of the apartment building we were living in.  Plus, I had to "train" for the 5k fun-run that I got roped in to doing by my girlfriend's colleagues, some of whom were real runners.  And as it turned out, it was kinda fun after you got used to it.

That was a really long way of saying that running seems to be more popular, even though I probably notice more running since I am "part of the problem," so to speak.  The emergence and proliferation of the obstacle course race phenomenon has certainly helped put running into the spotlight of our collective consciousness, even if it's one of the ultimate First-World things people do.  I am also currently in one of the US's top running cities, apparently, so that must cloud my judgement a bit too.  (They say it's nice to run in DC because it's so flat... they obviously have only run on the Mall.)

But since I am more in to trail running, I notice things like TrailPorn.com and this video about "The Joy of Running in a Beautiful Place".

Running has definitely become a thing for me.  I try to run three or four times a week and was even upping my mileage a bit.  Google Now suggests I read articles from Competitor and Strength Running and YouTube wants to help me improve my technique and speed.  I was even inspired to sign up for my first real race, a trail half marathon run in northern Virginia along the Potomac.  Good thing it's not until the spring, because I might have a stress fracture in my second metatarsal.  I'm not sure what kind of vigorous exercises I can do that don't involve loading and unloading that part of my foot...

100k Follow-up and a fight with Tendinopathy


Today is the summer solstice, yay!  Or, "June" solstice for those of you not in the Northern Hemisphere.  That gets capitalized, right?  Anyway, I've talked about my mixed feelings about the first day of summer before... A holy-crap-long-time-ago, actually.  They're still basically the same, just less Emo.

Being the summer solstice, it's also nearly my birthday!  Which also means that it's been almost a month since I said I was going to try to up my running game a bit and set a goal of running 100 km in 30 days.

I'm pleased to say that I met and even exceeded that goal by just a little bit, and that I even worked through my first real running-related injury doing it!  After a long-ish run on June 7th I developed some pretty good pain in my left Achilles area and I immediately started nervously Googling for a diagnosis and treatment ideas.  (What, you think I'm actually going to go to a doctor?!  Bah!)

Luckily, what I had (have?) was/is pretty mild, and there have been some pretty good studies on non-surgical, strength based treatments for Achilles tendinopathy, including those mentioned in this long, un-dated, poorly titled, but otherwise very good article.  I have stuck pretty closely to that program for the past week and can happily report that I ran over 20 miles this week with only minimal discomfort.  I'm obviously going to keep up the calf strengthening work for at least another couple of weeks and see how the pain is, because honestly, your calves can never be too strong.

Ever had anything come between you and your goals?  Maybe just a running injury story you want to share?  Let me know!

Also, if you're interested in running (and not just racing), I highly recommend checking out Jason Fitzgerald's Strength Running website.  Run happy!
Posted by Unknown at 6:49 PM under: fitness, goals, injury

I don't usually set goals, especially time based ones, but here goes!  I decided that I will run 100 km in the month before my birthday, May 24 to June 24.  I know some crazy runner folks knock that out every week without breaking a sweat, but since I only run three times a week max and I'm not that good, this should be a real challenge. Also, since I took today off, I'm already behind. 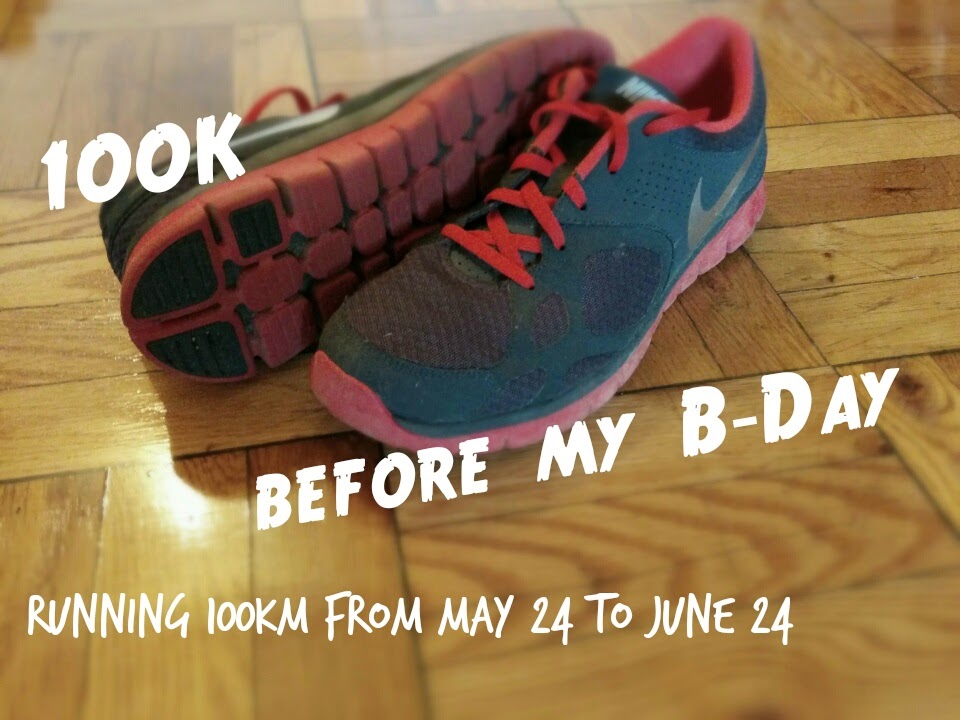 I'll be keeping track of my runs using Map My Run's app on my phone, so everything should be tracked pretty well and I won't be able to cheat.  Not that I would.  This goal of course is dependent on my not getting injured or really ill in the next four weeks.  I'm obviously not that hard core.

You, dear Internet, don't have to do anything. I'm just putting this out there as a little motivation. But, if you want to try to set a goal, running or otherwise for the next four weeks, we can try together!  (Let me know if you do!)  Luckily, I happen to be in one of the "top cities for runners", so I won't be alone on the trail.

If you do make a goal, remember to make it "SMART" - Specific, Measurable, Achievable, Realistic, and Timely.  You'll have a much better chance of succeeding if you make your goals that way, and if you don't make it for some reason, you will more easily be able to determine why.
Posted by Unknown at 6:36 PM under: fitness, goals, outdoors, personal

Okay, actually just the Jambalaya part of that.  But I've got Hank Williams III on the stereo, so that's gotta count for something.


Jambalaya is fascinating, delicious, and easy to make.  I'm not sure why it's not more popular outside of the South (a place I've still never been), but maybe it's considered lowbrow or something because much easier to make than it's fancier cousins, gumbo and étouffée.  If you're a subscriber to the Alton Brown school of knowing the background of your recipes, definitely read the Wikipedia entry on Jambalaya.

Since I've got some on the stove right now, I'll tell you how I usually make it...

So there you have it!  It's a whole meal in one pot, and it's definitely of the "stick to the ribs" variety.  And it takes just long enough to cook, you have time to clean up the prep stuff before the rice is finished.  If you haven't been typing the whole time, that is.

People who read the Wikipedia entry would know that this is "brown" or Cajun jambalaya.  If you prefer the "red", or Creole, variety, add some canned or fresh tomatoes before you add the rice.  This one is actually rather yellow because of the saffron, but I digress.