Ohp, they spotted me.

Contrary to popular opinion, I do work pretty hard at my job. But I feel that I do waste an inordinate amount of time on occasion.

Like today. When my boss is out of the office, the phone isn't ringing off the hook, and I'm basically shuffling papers. Well, computerized papers, mostly.

But apparently, people like me (and you - don't question it!) cost America just over half a trillion dollars every year because of our lazyness.

On that note, I should get back to work. But in my defense, they survey was based on an eight-hour work day, and I'm "working" at least nine-hours a day.

Out There. Even for Fox.

From FOXNews.com's "Out There" archive comes these gems:

There exists a place — a solemn hall of shame, of sorts — where the profane, snide and otherwise inappropriate greeting cards you always wished for go to die...

...Included among the discarded messages are Christmas cards [These are my favorites.]:

INSIDE: “Or drink alone. Who am I to judge?”

FRONT: "Christmas just wouldn't be the same without peanut brittle."

FRONT: ''My ex-girlfriend had a cat named Love because she said that's what it gave her.''

INSIDE: ''So I called it Bloody Forearms. Hope no one gets you a cat for your birthday.''

INSIDE: ''Or was that the natural disaster siren? Sometimes I get them confused. Whatever it was, it was loud. Congratulations ... or take cover!''

FRONT: ''Marriage is a bond that is unbreakable except by two-thirds of the population.''

INSIDE: ''But it's you top-third couples that give the rest of us hope.''

Get well cards for any occasion:

INSIDE: “Hi! Welcome back from your coma!”

And even cards for your mom:

INSIDE: ''At least I hope it's pride. Otherwise, I'm pregnant again.''

How could these potential knee-slappers end up on the wall of shame?

And from the same archives come this story that will strike close to home for many of us:

Just Another Evil Kitty Turned to a Life of Crime

FAIRFIELD, Conn. (AP) — Residents of the neighborhood of Sunset Circle say they have been terrorized by a ruthless, hairy, scary prowler — a crazy cat named Lewis.

Lewis is so scary, in fact, that he's been personally issued a restraining order by the town's animal control officer.

"He looks like Felix the Cat and has six toes on each foot, each with a long claw," Janet Kettman, a neighbor said Monday. "They are formidable weapons."

The neighbors said those weapons, along with catlike stealth, have allowed Lewis to attack at least a half dozen people and ambush the Avon lady as she was getting out of her car.

Some of those who were bitten and scratched ended up seeking treatment at area hospitals, so Animal Control Officer Rachel Solveira placed a restraining order on him.

It was the first time such an action was taken against a cat in Fairfield.

In effect, Lewis is under house arrest, forbidden to leave his home.

Solveira also arrested the cat's owner, Ruth Cisero, for failing to comply with the restraining order and reckless endangerment.

This is quite possibly the saddest thing I have ever seen. Not only is this poor little kitten not going to ever make it onto CuteOverload, it is going to be horribly confused all the time because it has TWO FACES!

Of course, Fox News has coverage of this poor little abomination of a Two-Faced Kitten Born in Oregon in June. Complete with slightly freaky picture. (Which I did not have the heart to post here.)

This not only brings new meaning to "another mouth to feed," (which in this case goes to the same stomach, so does it really apply?) but also makes you wonder why we still havn't seen Tom Scientology Cruise's new baby (born around the same time). But I think the take-away message from this freak-of-psudo-nature is that Eastern-Oregon Rednecks should never be allowed to breed animals. As cute as miniature cast would be, it seems like it would only end in tears.
Posted by Unknown at 4:53 PM

After watching the truely frightening new video from the Hoffmeister again, I realized that this is all new footage. At first I figured it was just a re-edit of an old video that he had made in Germany, or somewhere. But as I watched, I realized that Hoff looks quite a bit older in this video than in the older ones. I have thus concluded that (a) this is a truely new video, and (b) that Hasselhoff infact does age!

Had I really been tricked into believing all the hype that Davey was super-human? Maybe I just wanted to believe it, but alas, it can't be true. Well... it can't all be true. He very well could still be super-human, but he can't escape aging with the rest of us.

Unlike the other super-human being that prowles the internet insearch of orphans upon which to snack: Chuck Norris. Now there's a fine specimine of internet hype! Like they say, Chuck Norris doesn't sleep; he waits.

And somewhere among all of this, I thought, "Hey, in an epic battle to the death, who would win: David Hasselhoff, or Chuck Norris?" After being assured that The Hoff would for sure Hassle Mr. Norris to death (because he is apparently the devil walking on the earth (see video)), I was still pulling for Chuck.

This being the internet and the age of Google, there was only one logical way to solve this conflict:
Google Fight
Yes, that's right, Google Fight. Where you can pit any two search terms against eachother in a quest for victory.

So there you have it. Another one of life's mysteries solved, thanks to me and my friend, the Internet. ;)
Posted by Unknown at 4:58 PM

Is that a banana in your ear or are you just happy to see me? 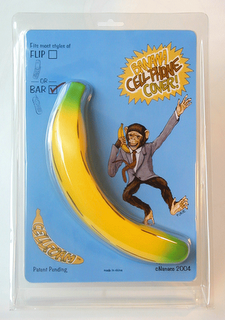 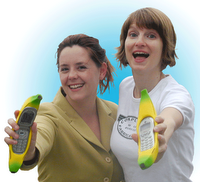 "Turn your cellie into a classic gag prop with this foam banana phone cover. Slip in your mobile and you'll look like a maniac talking into a piece of fruit. Comes in clamshell and candy bar phone versions. Hillarious!"

First, there was the stupid talking into actual fruit gag, then there was Raffi, now there's this crazy thing that some guy in SF California came up with. (Available at FredFlare.com) This might be a little too OTT... but I still think I'm gonna order one... eventually. I mean, ten bones? C'mon, it'd be about the funniest thing ever.
Posted by Unknown at 9:12 AM

Now, as y'all know, I'm not one of those "Save Tibet" whiners, and I'm certainly not a big fan of Richard Gere's socio-political aspirations, but as much as I don't like these folks, I hate Communist China.

And don't get me wrong; as usual, I don't have a problem with the Chinese people. They are as hard working and industrious as anyone else. But they are under the blade of a totolitarian, communist dictatorship that denies them of any way to really better themselves (their Gross Net Income per capita is still only $1,740 - and you can bet that 90% of that is in the big cities).

Sure, China is one of our great trading partners (read: we buy their crap, not the other way around).; sure, they're on the UN Security Council and pretend to be our friends; but in reality, they're just a cleaned up front for the old communist ways of the cold war. And we had best remember that fact.
Posted by Unknown at 5:15 PM

Oh boy, The Hoffmeister has done it again. You'd better check out the New Music Video From David "The Hoff" Hasselhoff - "Jump In My Car" on Google Video. It's, um, pretty awesome.


The Hoff and a neeto right-hand-drive Austrailian version of Kit (or at least a mirrored camera angle) pick up and subsiquently kick-to-the-curb some hot chick in this apparently brand new video made by Sony of Australia.

Just watch. In amazenent. And horror, there's some of that too.

This afternoon, while creepy gmail chatting with eachother at our respective jobs and being totally productive, the discovery went something like this:

For those of you who have not used Gmail and/or it's "chat" feature, you're missing out. It allows any Gmail user who is logged in to talk to anyone of their other Gmail contacts who are also logged in right there in the page. Pretty nifty.

But the coolest part is that when you type :) or :D or :'( the system knows that you wanted a smile, a grin, or a tear. But instead of dorkily putting a little yellow blob face in your text, it smoothly and creepily rotates your text into the face you were trying to make. And, apparently, you can't copy and paste one to demonstrate.

But you can't type a nose. As in :-). If you do, your little smily face just sits there with a crik in its neck and you look like a looser and a dork.

Or maybe it smells like a compost heap...
Posted by Unknown at 4:01 PM

Hmm... I'm not sure if this is a very good idea: melding Cute Overload with You're The Man Now Dog.

But it's happened. Check it out. http://islandsun.ytmnd.com/