Lighting is still in the Dark Age

BBC NEWS | Science/Nature | Lighting is still in the Dark Age

Even though this is some greeny-weenie column in the BBC, and even though I don't think that there is a fundamental "right to enjoy the beauty of the night sky," this is still worth some thought.

Any of us that live in or have visited a large city undoutably have noticed the lack of stars in the sky, even if it appears good and black to our eyes. This is caused by the amount of ambient light not allowing the relatively dim light of the stars to show through. There are all kinds of innitiatives and special interest groups trying to perserve a "dark sky," but just as many home owners and civic leaders that believe that brighter lighs are better.

Neither side is completely correct. Everyone needs artificial lighting for a multitide of tasks, but too much is not only ugly, it's distracting and dangerous. Unfortunately and predicatably, this article does not give any suggestions to fix the problem, even on a personal scale. It only preaches what we are all doing wrong.
Posted by Unknown at 5:16 PM

Not a real word

If this word was not on Dictionary.com, I would have figured that George W Bush had invented it.

The word is Practicable. That's right; kinda like practical and able mushed together.

Seems like you hear about a recall from General Motors or Ford every month or so, but you rarely hear about any of the Asian auto makers' recalls, no mater how serious.

So for fairness and accuracy, the Wall Street Journal reports (subscription required, and link will only last 90 days) that last year in the U.S. Toyota recalled 2.38 million vehicles, according to the National Highway Traffic Safety Administration. That's more than the 2.26 million it sold here.

These aren't exactly minor recalls for a turn signal switch or something either. According to the Wall Street Journal, "This year, the company has recalled 628,000 vehicles in the U.S., and people familiar with the matter say it may soon recall an additional half-million vehicles. The latest recall would affect the current generation of the Sienna minivan, because of concern that poorly designed locking devices for rear seats may fail to securely anchor them to the vehicle floor."

Toyota's sales figures and capital outlay for new developents have been on a steep rise since the mid-nineties, but their fast growth may have caught up with them. Like Chrysler, Toyota now relies nearly exclusively on computer aided design and engineering to get its products to market in about half the time as doing it by hand. But as anyone who uses computers more than occasionally knows, computers make mistakes. Things slip through the cracks.

Things like this gem: "In Japan this year, for instance, Toyota discovered it had made the rear axle of one sport-utility vehicle with the material used for another SUV. Designs for the two rear axles are almost identical, but the metal materials used to produce them are different enough that mixing the parts up caused concern over the strength of the axle. A Toyota spokesman said there was a question of the strength of the axle but declined to elaborate." Oops.

But since these aren't American companies, they don't have to live up to American standards. The Journal quotes one senior engineer as saying that, ""We used to do quiet recalls called 'service campaigns' to deal with many defects, but we're not going to hide anything any more." Probably a good choise, considering that a few short years ago, Mitsubishi was nearly driven out of business by the after effects of the way it handled recalls in the wake of a painful scandal involving an alleged coverup of vehicle defects.

And for your reading pleasure, here's a news brief carried in the WSJ and another link to the original story cited here.

Toyota is wheeling its somewhat battered image into the equivalent of an auto-body shop to bang out some dents created by a surge of recalls and quality problems. The world's No. 2 producer of automobiles is considering delaying the introduction of some new models by as much as half a year in order to stem the problem.

The fast pace of new-model launches the company has undertaken has given rise to what a senior Toyota engineer calls "bonehead" mistakes that the old Toyota wouldn't have made. Last year in the U.S., Toyota recalled more vehicles than it sold, and recalls also are on the rise in Japan, where police and prosecutors are investigating possible professional negligence.

Analysts say the recent rise in recalls won't necessarily cause consumers to avoid Toyota cars, but it has been highly embarrassing for Toyota management and, with its reliability being called into question, the situation may set back efforts by the Japanese company to overtake General Motors as the world's No. 1 automobile producer.

Dr. Walter Williams, today’s guest host on the Rush Limbaugh show while Rush is out playing golf for the weekend, is a smart man. He is a professor at George Mason University and is one of the most popular guest hosts on Rush’s show. Incidentally, he also grew up in the same housing project as Bill Cosby.

In the second hour of today’s program, his guest was Juan Williams, Senior Correspondent at National Public Radio and Fox News. Now, as you may have guessed by his position at NPR, he is not a conservative, but he is a very smart and rational person.

Juan Williams has recently published a book called Enough: The Phony Leaders, Dead-End Movenents, and Culture of Failure That Are Undermining Black America--And What We Can Do About It, talking about the situation of Blacks in America today. Since both of the Williams are Black, and the main point of this guest appearance was to talk about the new book, the conversation centered on that subject and brought up some very good points. Of course, being a conservative, a Rush listener, and a fan of Bill Cosby, very little of this was new to me. They did, however, repeat one of Mr. Cosby’s assertions that I thought was pure genius, even though it is basically common sense. (Common sense is apparently not so common to a lot of our population – Black or White.)

Four easy steps to get out of poverty:

Doesn’t sound terribly difficult, eh? The preceding is in no way specific to any race, creed, religion, gender, sexual orientation, national origin, or status as a veteran. (Did I miss anyone?) But as of the 2004 U.S. Census, 24.7% of Blacks are living under the poverty line, as opposed to 8.6% for Whites and 21.9% for Hispanics (an issue a little closer to the hearts of us in Colorado).

Later in the show the topic turned to the fact that we do not have the right to sell our internal organs in a capitalistic market and how this would greatly reduce the long running supply shortage. I happen to agree with Dr. Williams’ assertion that we should be allowed to sell our organs, but that’s another story.

In the spirit of rambling on way past where I should have stopped, I’ll leave you with Walter Williams’ Wisdom of the Month:

I have a problem with this:

My penis is a terrorist?

Sinfest is a high quality comic.
Posted by Unknown at 9:39 AM

The BBC reports this morning that security in a relationship is 'bad news for sex drive' in women.

Any (honest) married person will tell you "duh!" of course the women's sex drive is reduced once she feels secure in the relationship. She's got you on the hook! You're committed! She doesn't have to work to make sure you stick around once you've taken the plunge. Now sex can be used as a weapon and a bargaining tool by the women, as it was naturally intended! Not some keen way to share a connection or show your love to your partner, c'mon!

Or maybe it's the guy. After a while, the motivation to actually romance your partner fades away, and the women's response to this would logically be a reduced sex drive.

Do I have an unhealthy outlook on life? (hehe)
Posted by Unknown at 3:02 PM

Aren't gas prices ridiculous? They have literally doubled in the last five years. But here's a place (provided by the AAA and the Oil Price Information Service) where you can at least check them out.

Warning: It's kinda depressing.
Posted by Unknown at 9:23 AM

The New York Times at War With America

Here is a good article from Michael Barone at RealClearPolitics - The New York Times at War With America. It serves as a pretty good explanation of how the mainstream media seem to enjoy aiding and abetting our enemies. As long as they can perceive something as damaging to conservatives, and President Bush in particular, they will push it to the front page and to-hell-with-the-consequences.

Freedom of the press is one of our greatest strengths as a nation and world power -- heck, freedom of the press is the reason millions of us are able to post pretty much whatever we want on our blogs without fear of a late-night disappearance. But there is a rather obvious point at which some things would be better off going unsaid.
Posted by Unknown at 4:05 PM 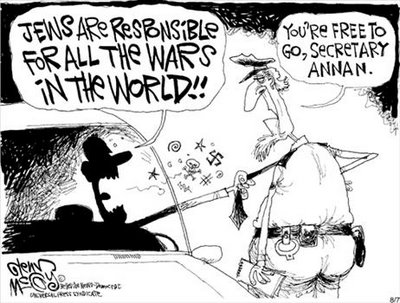 You laugh because it's true.

(Not the Jews causing all the wars part, the Kofe Annon / U.N. being anti-jew part.)
Posted by Unknown at 11:47 AM

Here is some good reading for today.  Not all of it is from today, but I think you know what I mean.  These articles cover a lot of ground: from race relations to Israel to interstate commerce; but I don’t think that’s too much for one day.  Plus, I’m sure they’re all related somehow.

First up, “How Liberals Injure Blacks” by Dennis Prager is an interesting article exploring how our efforts towards “political correctness” lead to hurting the very people PC types feel need the most protection.

“The Real Religion of ‘Peace’” by Jonathan Tobin and “The Middle East Conflict is Hard to Solve but Easy to Explain” by Dennis Prager look at the Middle East and Jewish / Muslim relations in a straight forward light.  (In fact, everyone should probably just go to www.townhall.com and read all of Dennis Prager’s columns.  He’s good.)

Rounding it out, for now, is “Wake up America!” by Doug Wilson, in which he examines China’s way of doing business in comparison to our own.  Just in case you were wondering, we have something to worry about.  Apparently there is a follow-up article coming.

Got eleven extra minutes? How about beating Super Mario 3!

Check out the video on ebaumsworld.

Maybe I'm just a huge nerd... but this totally entertains me.