They're starting to turn...

As the Autumn leaves start to turn from green to yellow, some prominent democrats are turning away from (socialist) Barack Obama:

WASHINGTON (AP) — A top Hillary Rodham Clinton fundraiser threw her support behind Republican John McCain on Wednesday, saying he will lead the country in a centrist fashion and accusing the Democrats of becoming too extreme.

"I believe that Barack Obama, with MoveOn.org and Nancy Pelosi and Howard Dean, has taken the Democratic Party — and they will continue to — too far to the left," Lynn Forester de Rothschild said. "I'm not comfortable there."

At least some democrats can see where the "post-partisan" Obama campaign is going... all the way to the looney left.
Posted by mnthomp at 7:29 AM under: commentary, politics

Seven years ago today, the world changed. Let's not forget that. Ever.
Posted by mnthomp at 5:48 PM

The End is Near!

Oh, wait, what?  Just turning on the Large Hadron Collider didn't create a black hole to gobble up the Earth?  And it didn't produce a strangelet that destroyed all matter?  Oh... well, huzzah for CERN then!

As you may have heard, the European Organisation for Nuclear Research, better know by its French acronym "CERN," switched on it's new toy at about 2:36 a.m. Mountain time this morning -- And nothing bad happened.  Their new $5 billion, world's largest and most powerful (14 trillion electron volt) particle accelerator came online this morning without a hitch and sent a few partiles in a clockwise trip around it's 17-mile loop.  It won't get to do any smashin' for a few more weeks, but it will hopefully help physisicst a better understanding of the birth of the Universe by letting them see what the very first few nano-seconds of the Big Bang may have looked like.
Cool.  More news at Wired and Google News, and of course, at CERN's site.
Posted by mnthomp at 2:20 PM under: astronomy, geek, science

Words to live by

"Being defeated is often a temporary condition. Giving up is what makes it permanent."
- Marilyn vos Savant

Posted by mnthomp at 8:12 AM under: dale carnegie, quotes 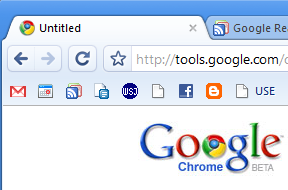 Just announced (via comic book) yesterday and released to the masses today, Google's new open-source jaunt into the browser world, "Chrome," aims to help us get more done on the Internet with less junk in the way.
Read about Chrome's nifty features here, and download it here.
I downloaded in about 15 minutes ago and am immediately impressed.  It has a very Safari look to it, which is alright, but the first neat thing I noticed was the lack of a normal Windows title bar at the top of the window - talk about getting things out of your way!  I also promptly missed my Firfox extent ions, specifically mouse gestures and Focus Last Selected Tab, but Chrome imported all of my bookmarks without any problems (other than having to close Firefox to do it), and everything seems to work.  Since the "awesome-bar" name was already taken by FF3's spiffy new multipurpose address bar, Google called theirs the "omni-bar" since it's the one place to type anything at the top of the screen.  It seems to work very smoothly though, ever smoother than the 'Fox's.
The other big thing is where the tabs are in relation to the address bar.  They're above it.  Each tab has it's own address bar, bookmark buttons, etc.  This may seem a little bit weird, but it really matches the way Chrome works - each tab is its own process in memory, so it doesn't have to share and when you close it, it's actually gone.  This lets Chrome handle memory much better than Firefox 2 or 3.  With four tabs open it appears to be consuming about 42 MB of RAM for the program itself and then 4 to 16 MB for each tab, depending on what each is doing, each in their own process.  While not exactly light weight, this is certainly not bad.  I will have to keep an eye on it to see how it goes after a couple hours worth of surfing.
Of course, being Google, this new browser was released in beta form, but it definitely will be taken as a shot across the bow and a direct challenge by Microsoft.  Since Google's Chrome browser is written from scratch and with the open-source community in mind, I'm not sure how the other open-source browser, Firefox, will react to this development, but I think this is just what we needed to kick the browser wars up a notch.
Give it a try, lemme know what you think!
Also, check out Lifehacker's screenshot tour here.
Posted by mnthomp at 1:53 PM under: geek, internet