I Think I'll Reflect On The Federal Reserve...

If you've got an extra 75 minutes on your hands and want to learn about the origins and mission of the U.S. Federal Reserve Bank (and who doesn't?), then you should definitely tune in to the Fed Chairman's four-part lecture series at George Washington University. 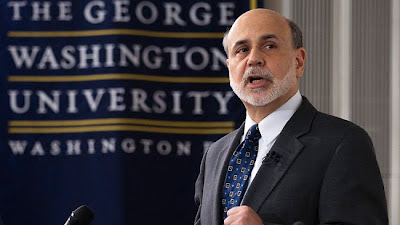 Ben Bernanke delivered his first lecture to a business class called "Reflections of the Federal Reserve and its Place in Today's Economy" today (March 20) and the Chairman is scheduled to lecture again on March 22, 27 and 29 from 12:45 - 2pm Eastern time (10:45am to 12:00pm for us in the Mountain zone).

I watched today's live stream and was definitely not bored, nor did it feel totally over my head.  Having just heard about it this morning on the radio, I obviously didn't do the assigned reading - and I'm not sure that I will - but Mr Bernanke did a great job of covering the "Fundamentals, History, and Principles of Central Banking" in a way that even someone in a flyover state like me could understand.  ;)  He was a university professor for several years, after all.  A pdf of his PowerPoint presentation and the recorded video of his lecture (when it's posted) is available on the Federal Reserve's website, here.

The Fed Chairman's lectures make up the first four sessions of a spring term course at GWU that is being professionally recorded, probably at taxpayer expense.  All ten sessions will be taped and should be posted to YouTube, but the final six will not be steamed.  I am definitely going to try to watch at least the first four with Mr Bernanke, and maybe even try to keep up with the reading.  The Federal Reserve and its role are something that I think most people, myself included, don't know much about, and I would certainly like to understand better.  Also, this course could serve as a little reminder of what being in school is like, in the event that I do eventually decide to go back. 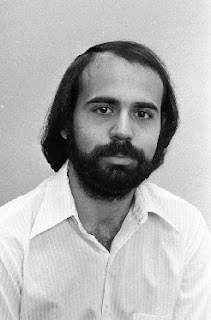 [Okay, so I wrote this post on Tuesday afternoon, but then the computer peed all over itself and I couldn't actually publish.  Today (Wednesday) I did the aforementioned reading, and I think I have decided to try to stick with the course.  This is going to cut into my new-found "pleasure reading" time, but the more you read, the better you get at it, right?]

Also, The Evolution of Bernanke’s Beard is awesome.

Side note... I highly doubt that the links to these videos and resources will be any good after this class session (in the case of GWU) or Mr Bernanke's time as Chairman (in the Fed's case) are over.  All of the videos should end up on YouTube, and with any luck will stay there, but the class syllabus will probably be replaced with next year's version.  I've uploaded the basic html of the syllabus page to my public Dropbox folder, so it should be available for a little longer if anyone needs to find it.
Posted by mnthomp at 12:39 PM under: economics, government, school

Thanks for compiling these tools! I actually do think that would be interesting to study...maybe someday when I get done with visa law. :)

Considering that the tuition at GWU is a staggering $44,000 per year, it's possible that the recordings are paid for by student money, rather than taxpayers. (Or, more likely, by some pretty intense student loans)

Yeah, I've been a slacker and haven't really watched any more. Dis some of the readings though, and they weren't too bad.

You're probably right that the filming is paid for by tuition, but we're still paying Bernanke to be there. Not too bad of a deal.