Rush Limbaugh often uses this phrase on his radio show, but have you ever wondered what "stuck on stupid" really meant?

Well, here is an example: 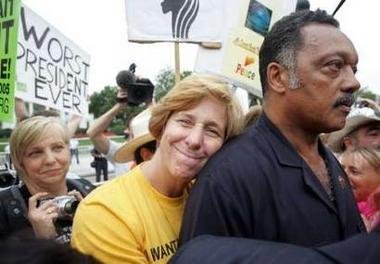 The grinning idiot clinging to Je$$e Jack$on is Cindy Sheehan... The sob sister protesting the war at President Bush's ranch who lost her son in the war. The same son she gave up in her divorce when he was 7 years old. She never had anything to do with that son after the divorce and he was raised by his father and stepmother. She never saw him after he was 7 years old, but our mainstream press never tells anyone that.

And by the way, if you wonder why she has so much free time... She is going through another divorce right now and guess what? She is giving up custody of another son.

As Forrest Gump once wisely proclaimed, "Stupid is as stupid does."

(Most of the above was stolen from an email that I recieved, so I cannot confirm the truthiness of it, but the picture says it all, even if the rest is made up.)
Posted by mnthomp at 3:27 PM