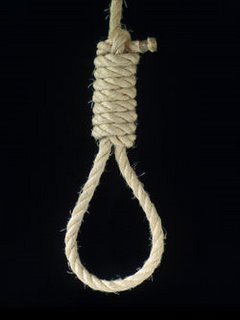 
Former brutal dictator and oppressor of the Iraqi people, Saddam Hussein, was found guilty of crimes against humanity and generally being a pain in the ass on Sunday. He was sentenced to death by hanging, but any death penalty verdict is automatically appealed to a nine judge panel with no time limit.

Personally, I think they need to kill him as fast as possible to eliminate any shadow of hope that the Saddam-loyal Sunnis might still hold for his return to power.

Obviously, there has been a difference in reactions between the different factions of the Iraqi populous. Here is my summary:

Here's how a more respectable news-source summed it up:

Sunnis are likely to remain unhappy even if Saddam were to live. It is their diminished role in the post-Saddam Iraq that distresses them.

Saddam matters, without question, to the Shi'ites. The violence has reinforced the determination of the Shi'ites and Kurds, who suffered immensely under Saddam's rule, to put an end to any chance the former regime might make a comeback.