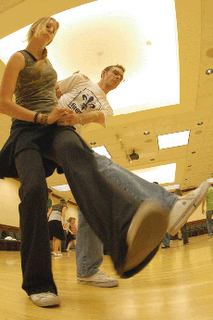 Woot! I was on the front page (below the fold) of our college newspaper yesterday!

[The caption reads "Summer Criswell, Sophomore, Graphic Design, and Matt Thompson, CSU Alumnus, kickin' it up Wednesday, September 20, 2006, at the LSC as they and fellow members of The Swing Society polish their dance routine."]

About two months ago, the Rocky Mountain Collegian, CSU's daily student newspaper, decided to do a story on the student organization that I am (still) involved in and our struggles to get a decent place to dance on campus. The title of the piece, "Swing Society feels no love from CSU" accurately reflects the general feeling of club leadership. [The Collegian's new site layout is pretty nice, too.]

Of course, the story didn't run when it was originally intended. It probably got bumped to make room for a story on the ski team, or something. But it did run yesterday(!), and luckily the writer called our president to update our situation... which has now somehow morphed into a struggle over our club's insurance status. (CSU wants the club to buy our own liability insurance because we are "high-risk.")

As a side note, I have heard from a reputable source that all the trouble that the Swing Society is having lately is the result of some new administration person's attempt to make a name for themselves. Hopefully I'll get a few more details on that later.

[Dun da dun dun... dun da dun dun daaaaa! The story you have just read is true, the names have been changed to protect the ignorant.]

Very shortly after this story was printed yesterday, my friend / sometimes partner / fellow blogger / club president was already getting worried phone calls from the student organizations administration people wanting to make sure that we don't "think no one cares" and "hope we know they are working towards a solution." Only time will tell if that actually happens.

But the point remains, I was on the front page of the newspaper!

um... if you were naked and in handcuffs the publicity probably would have been even worse!!