The Why of Mentos Eruptions

So, since I don't spend a lot of time on YouTube or digg or any of those other "popular" websites, I was a little behind on the whole Mentos + diet soda thing until I met Steve Spangler at the Magic in the Rockies conference in early September.

Steve is a science educator, Director of the National Hands-on Science Institute in , toy designer, television personality, and pseudo-magician. He is also the guy behind the popularization of the original "Mentos and Diet Coke" thing and the inventor of the contraption that drops the Mentos into the bottle. He is not the inventor of the experiment , however. That honor goes to science teacher Lee Marek, a friend of Mr Spangler.

The theory of why soda erupts out of the bottle when you drop Mentos candies into it is available on Steve Spanger's Science website, Wikipedia, and probably several other places, but the general idea is approximately as follows: 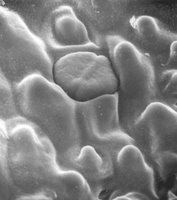 So basically, it's just a physical reaction of the CO2 and soda coming out of solution, not a real chemical explosion. The soda isn't really altered in any way, other than it comes out of the bottle and does not have any carbonation left.

There are plenty of good videos on YouTube that (sometimes) show this in action. One nice adaptation is this one of two French guys making rockets out of soda bottles.

As an interesting side note to this whole thing, Mentos appears to be a big advertising winner, while Coke is a huge looser. Mentos estimates the free marketing generated by the viral-video phenomenon to be worth $10 Million in marketing, while Coke Spokeswoman Susan McDermott says, "It's an entertaining phenomenon. We would hope people want to drink more than try experiments with it." And that "craziness with Mentos doesn't fit with the brand personality."

Wowzers. When I try it this weekend, I'm gonna use Pepsi. Or store brand.

Matt -- Nice summary on the Mentos thing. I'm in Atlanta where I'm setting off over 700 bottles of Diet Coke using almost 8,000 Mentos at a trade show for teachers. Educators are realizing that the popularity of this reaction has become a great teaching tool. There's tons of science behind this (as you know).

We just signed a deal with Mentos and we'll be releasing a whole new line of cool toys and gadgets in toys stores nationwide. Click on the link for more info...

Dude! Steve Spangler left a comment on your post!! What do you mean you DON'T spend much time on You Tube? ;o)

Wow, that's quite an honor to actually have to subject of one of my posts notice, let alone comment. Neat!

Unfortunately, it's been a little chilly to try this out for myself (and post pictures), and I CAN'T FIND ANY MENTOS at the store!

I think I might have to check out the new gadgets though... :p

Wow, you're a genius! So that explains that. Let me know how the pepsi thing goes.

Btw, I didn't notice any spikes and craters in my mentos candy. They must have used rotten candy for this expiriment..ya think?

The deformations in the surface are super tiny (hence the electron microscope image), so you probably can't see then with the nekid eye.

Still waiting on a warm day and a store that sells Mentos. It's supposed to be 60-something today, but I won't get off work until after dark, so no dice.