The End Is Nigh! 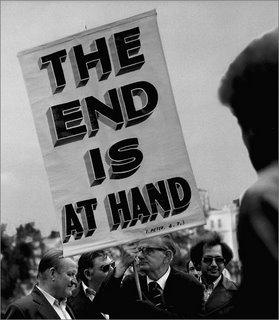 Yes, the crazy guy on the plaza with a big sign is right!

Well, nine years ago today in 1997 he could have been right. But he wasn't.

Today is Creation Day. At exactly twelve-noon on the 24th of October, 4004 B.C., God created the Heavens and the Earth. At least that's what literalists believe. And apparently, the earth would endure for exactly 6,000 years, since that's how long it took God to create it, given the One-God-Day equals One-Thousand-Man-Years conversion.

But, since 23 October 1997 passed without a hitch, and it's way past noon Jerusalem time today on 23 October 2006, I think that the millenarian theory doesn't really hold water anymore. (click on the title to read an interesting article, and here for more background.)

This leaves non-Muslim end-of-the-world-ists with only the Aztec option left. This one figures on the fact that all Aztec calendars end with the year 2012, and therefore the world ends then. (click here for a little on that.)
Posted by mnthomp at 12:00 PM